If you have ever ordered the Grilled Artichokes at The Cheesecake Factory then you know just how amazing they taste. The waitress sets three large wedges in front of you and you breathe in the steamy grilled aroma of garlic, spices, and warmed butter. Your taste buds begin to salivate and you dive into the appetizer like a kid with an ice cream sundae.  It’s beyond delicious. 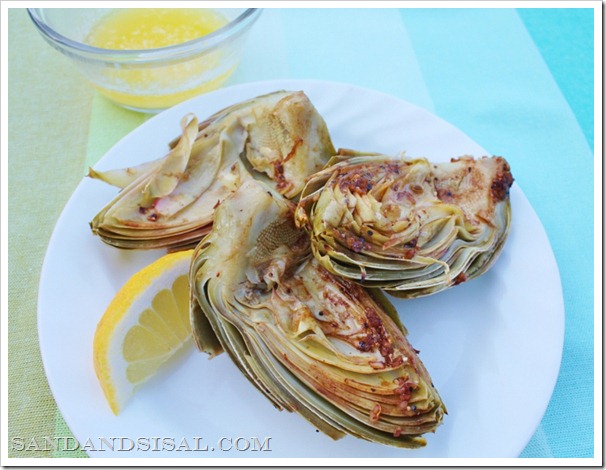 My passion for artichokes pretty much rivals my passion for chocolate. It’s strange I know, but this bizarre vegetable has been a favorite of mine since I was in preschool. We lived in California during that time and artichokes were plentiful, inexpensive, and best of all, they were fun to eat! Anything that requires using your hands to eat is fun don’t you think? 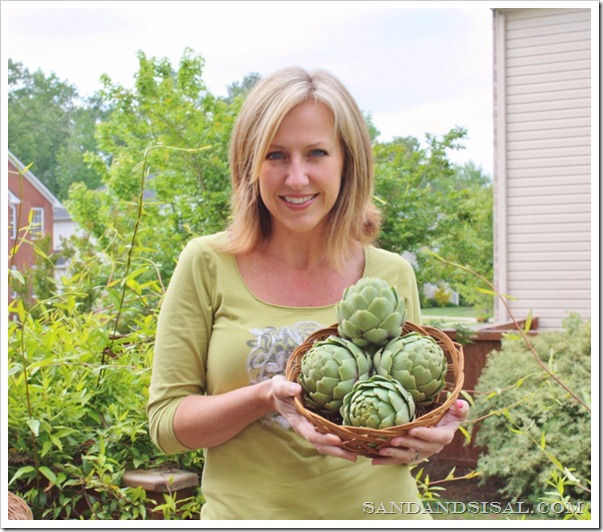 Last spring I was very surprised to come across artichoke plants at Home Depot. I wasn’t even aware we could grow artichokes here in coastal Virginia. I purchased two plants and they grew quite large but never produced any artichokes. Because the winter was abnormally mild this year, the artichokes kept growing. Suddenly, a month ago little artichokes started appearing! Oh happy day! 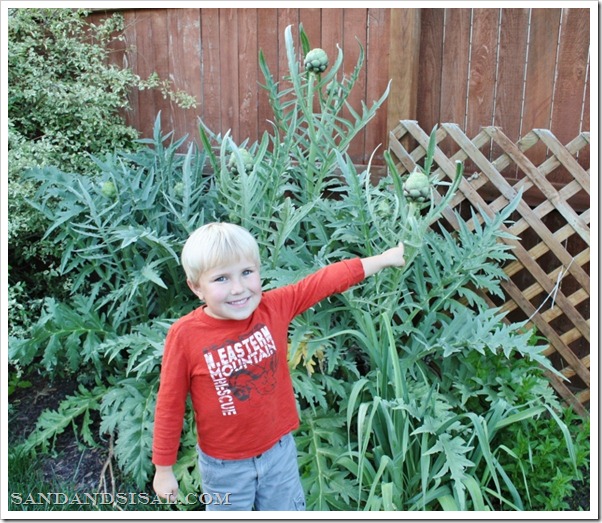 I think we have a total of ten artichokes between the two plants. That’s over $30 worth of artichokes for me to eat! Woo-Hoo!! 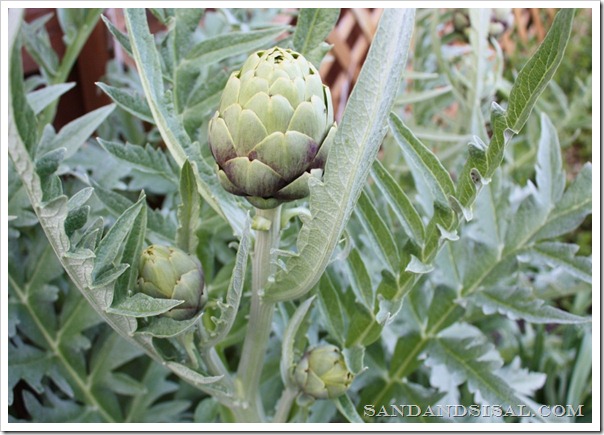 I want to share with you how to make your own Grilled Artichokes. This recipe will serve 4-6 people.

First, fill a large pot with 2 inches of water, two tablespoons of salt, a large lemon, quartered and a few cloves of garlic.  Have an additional lemon wedge on hand. Cut off the bottom so they sit upright nicely. Next with a pair of kitchen scissors trim off the top 1/3 of the surrounding leaves. Really, this step is purely optional in my opinion. We never trimmed them when I was young. I think restaurants trim them because the tip of the leaves can be sharp. 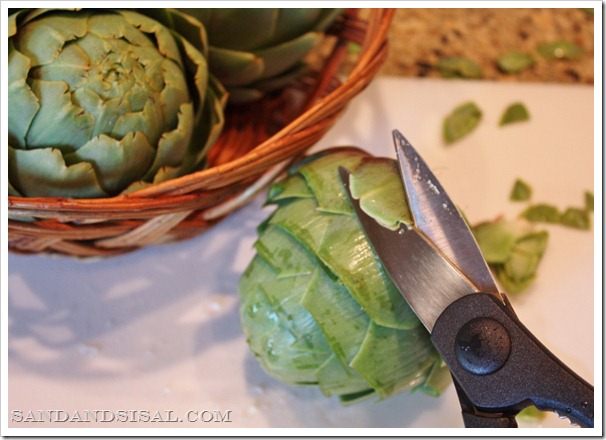 Turn your artichoke on its side and with a large chef knife, cut it into quarters if it’s very large or into thirds if it’s smaller. The inside of the artichoke will discolor in less than one minute when exposed to air so immediately rub it with your lemon wedge. Take a paring knife and cut out the hairy “choke” and it’s pink leaves. See the wedge on the left? That one has had the choke removed and it’s left with all that beautiful white artichoke heart! 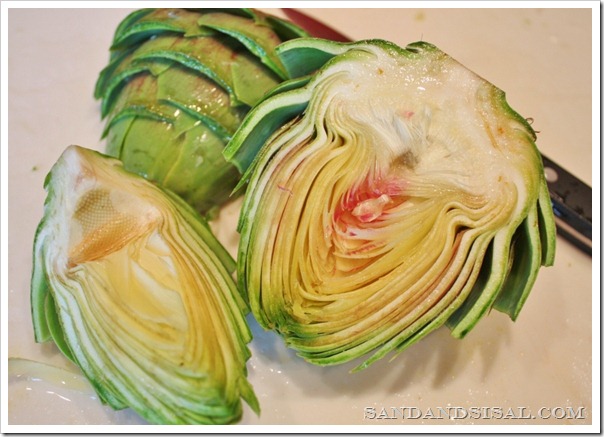 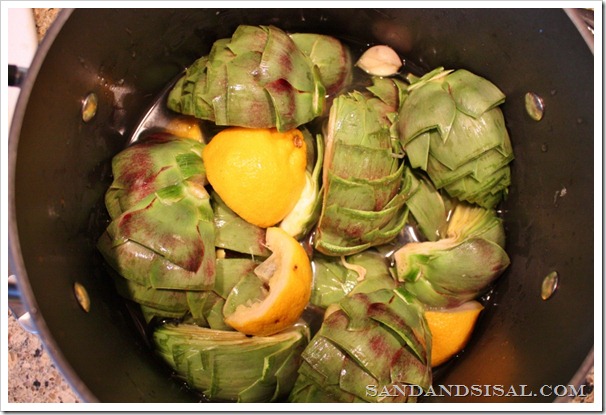 While the artichokes are cooking, you can prepare the marinade for the Grilled Artichokes. 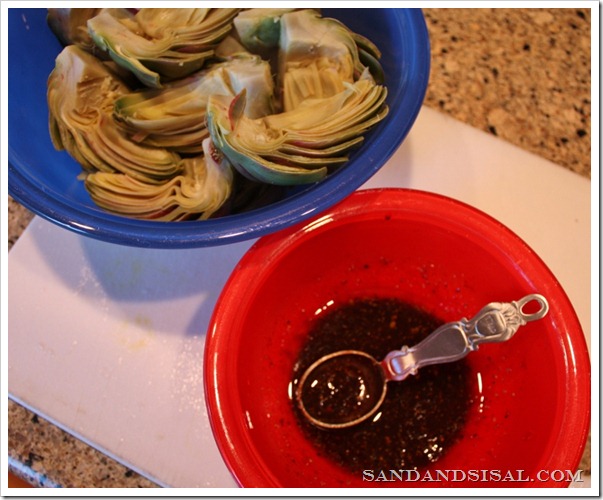 Drizzle the marinade over the artichokes and gently toss to coat well. 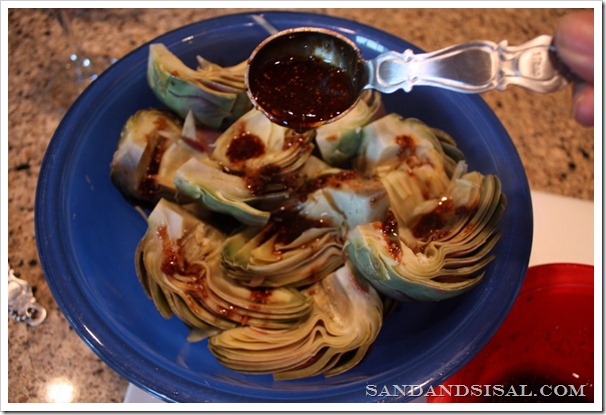 Place  the artichokes on the grill over medium low heat and grill for just a few minutes until you see slight charring. 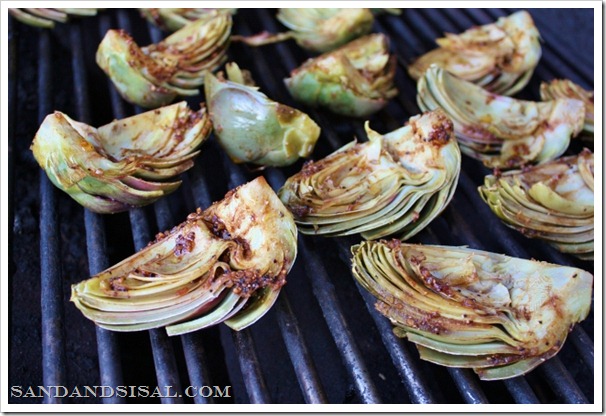 Serve the artichokes with additional marinade or melted butter for dipping. To eat the artichokes, peel off a leaf, dip the bottom in melted butter if desired, and use your teeth to scrape off the lower half of artichoke “meat” on leaf. Trust me, it’s absolutely addicting! 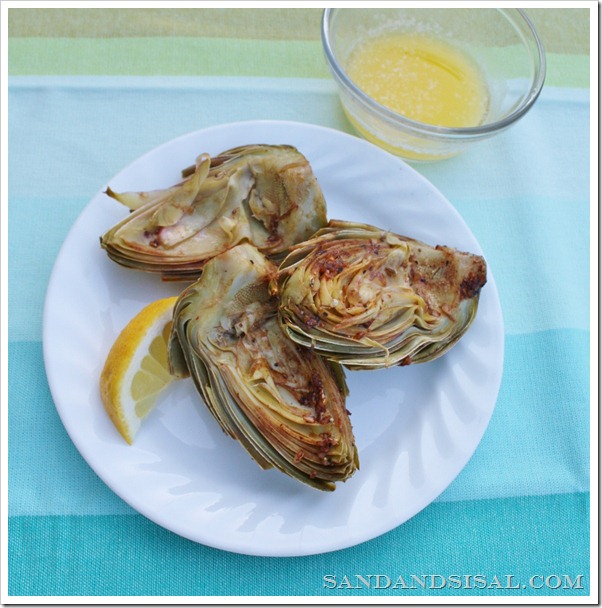