“We had no clue we were about to be hit. Hubs and I ventured out in the rain to our favorite sushi restaurant. It was date night and even though the rain was pouring, which made my hair was revert to its natural curly frizzy mess, we were determined to enjoy our time together. We ordered a dragon roll and the sushi sashimi platter and hot tea.  More people than expected filled the tables in our local secret sushi spot. Lightning flashed and thunder clapped, which was to be expected when bands from the hurricane a hundred miles south of us were passing through our area. A party of 8 came in with 4 little children squealing gleefully at their escape from the sudden deluge. It was a familiar site: Wet pony tailed girls, stomping water droplets off their cute new rainboots and moms looking at the hostess with a “I will tip you huge if you please seat us now and bring me a glass tall of wine” look in their eyes; and dads arriving after parking the car, sans-umbrella, shaking hands with their fellow buds. Yep, it was simply another normal rainy weekend in sushi suburbia… or so we thought…”.

The name Matthew means gift of God. I always felt bad for anyone who had a name that also ended up being a horrible hurricane. Most of the time the names the hurricane center assigns are usually rather not too appealing to me and unfortunately after the storm they take on a tainted sting, especially to anyone involved. My son’s name is Matthew so when we heard Hurricane Matthew was on it’s way up the coast he was slightly amused and gleeful, in a 15 yr. old teenage way, pumping his chest saying, “That’s right, don’t mess with me.” An action to which his older sisters would simply roll their eyes at.

I’m sort of a news junkie. At any given moment you can be sure to find a syndicated news radio or news station broadcasting in the background throughout the day, especially though once the threat of an approaching hurricane is issued. So last Tuesday, October 4th, I was watching the weather channel and saw the path. I freaked out. I grabbed my phone, pulled up the camera and shot a pic of my TV screen. Then I texted my mom, whose front yard is literally the beach, and my sister who lives in very flood prone area of Norfolk, this picture of the projected path of Matthew. 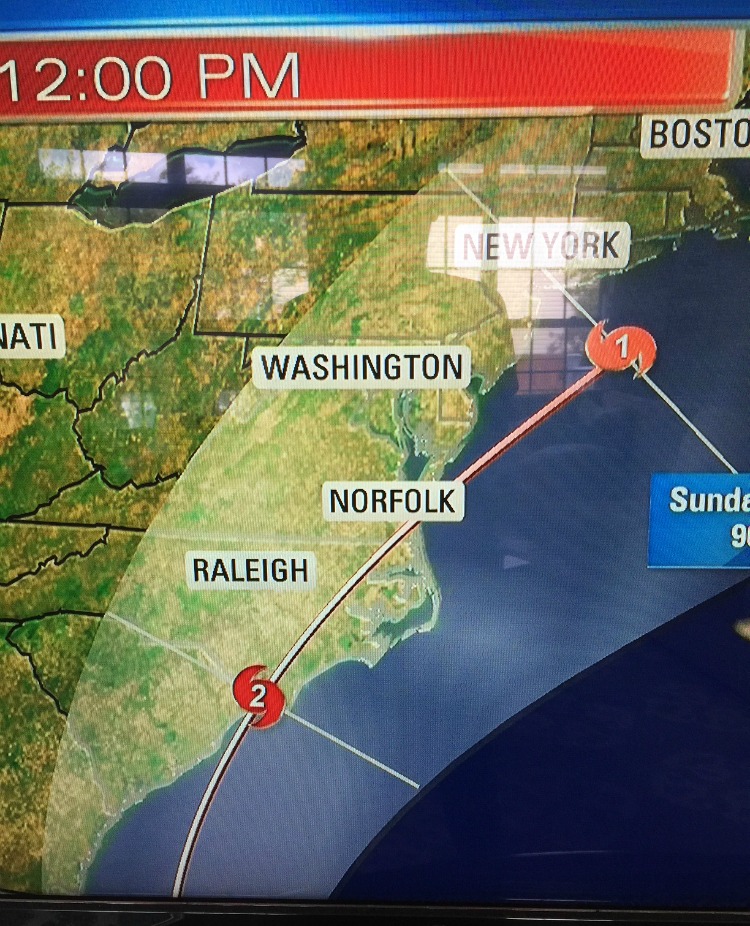 The TV screen view changed before I could snap a pic but it had shown a path with the big red level 2 hurricane icon directly over us. A path like that would be devasting for our area. Hurricanes are something we unfortunately grew accustomed to during the 2000’s. When you live without any power or worse yet, without water, for a week or more then you start to see how quickly society unravels, which is what we saw in Hurricane Isabel in 2003. It was the most damaging and expensive hurricanes since 1933 and cost our state $2.38 billion in damages. And guess what? It wasn’t even a level 2 when it hit us! A major hurricane is not something I want to experience again anytime soon.

So needless to say I was slightly freaking out. I went to the store and grabbed up the normal hurricane readiness supplies: cases of water, canned goods, batteries, several bottles of wine, etc. etc…. we know the drill. The lines were already long, the water shelves were empty, and the hurricane was still 5 days out. I tried to find a generator to no avail. They were already sold out across the entire area. Not a single Home Depot or Lowes had a generator left in our population of 1.3 million. We own a generator but we haven’t been able to get it to work in 4 years… sigh.

The forecasters then changed their prediction of Matthew’s path. Whew! It was going to hug the coast and brush the southern most point of the outerbanks of NC (OBX), and we would be IN THE CLEAR. The local news meteorologists all predicted that IT WOULD TURN.  We would get 5 inches approximately of rain and the areas right along the coast would get tropical storm winds for a bit, but not to worry. We’d be ok. Well guess what? They were wrong. 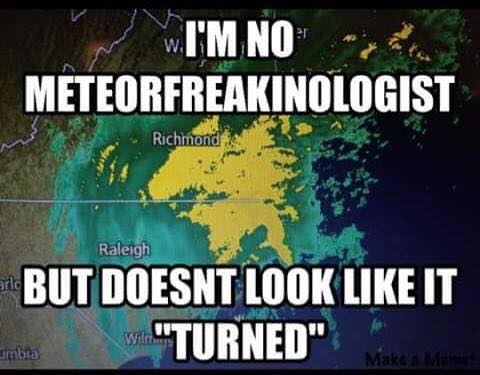 It’s one of those times when you knew you should have listened to your gut and didn’t. This would be the 3rd, yes 3rd time in less than 3 months that we have been flooded. I have lived in this neighborhood for nearly 10 years and never seen anything similar to the rainfall and flash flooding of 2016. My area of the city received 18.75 inches of rain over a 3 day period just 10 days earlier! Needless to say ANY significant rainfall set us up for catastrophe. We live at sea level and waterways surround every part of our area. You can not travel anywhere in Hampton Roads without going over several bridges or through tunnels. Water is everywhere and was about to multiply by 10,000.

So let’s get back to our sushi date night.

My oldest (age 20) had already headed out to Norfolk to see her boyfriend, my 17 year old was working at the local Chik-fil-a, my 15 yr. old was out for dinner with friends, the youngest was next door at a sleepover and we were enjoying our soggy date night. I dipped my dragon roll into the soy sauce mixed with wasabi and placed it in my mouth. Oh my… the wasabi light up my sinuses! All of the sudden it was a cacophony of blaring emergency phone alerts! If you’ve never had your iphone start screaming like a tornado siren then you live in a very peaceful area of our country. This alert has only happened once before on my phone and it was for an amber alert. The alarm is disturbing to say the least.

Every mom in the restaurant (note I said mom… not dad) whipped out their phones to see what was happening. It was a flash flood. We all breathed a sigh of relief realizing it wasn’t a tornado and went on enjoying our sushi. By the time we left the rain was coming down in sheets. The streets were filling up. A flash flood alert is no joke. We rushed home and moved our cars to higher ground.  I called my oldest who was unaware of what was happening outside. They moved her car. Within the hour the water was knee deep where she was and her boyfriend trucked her over to my mom’s house where she would stay the night. The hurricane had changed course and we were reaping it’s wrath.

You can not describe a mother’s anxiety when all hell starts breaking loose outside and her hens are not in their nest. Emphasis the FLASH in flash flood. A customer at Chik-fil-a came running in where my daughter was working and yelled that the flood waters were rising. They quickly closed and she waded over ankle deep to her car and drove home in what she said was the scariest drive of her life. I frantically text my son and he wasn’t responding. By the time the family he was out with realized what was happening it was dangerously late. Roads were flooded everywhere. People were crashing into ditches. Trees were blowing over onto houses. This was not supposed to be happening! He finally arrived home 3 hours later. The water outside our home was up to the bottom of the doors of the SUV.

Our streets quickly turned into rapids and whitecaps formed on the flood water. The wind was roaring. I could hear banging outside which I assumed was the outdoor furniture. We normally would have secured it or put it away entirely, but we were told “just a bit of rain and wind”. We barely slept at all the whole night, fearful a tornado would hit us or a tree would blow down. I will never put my full trust in the meterologists again. I will listen to my gut and prepare for the worse and hope for the best.

If you are already following me on Facebook then your might have seen my posts. If not, click play on the facebook video of our home when we woke up the next day.  Start with the top video and then left to right. 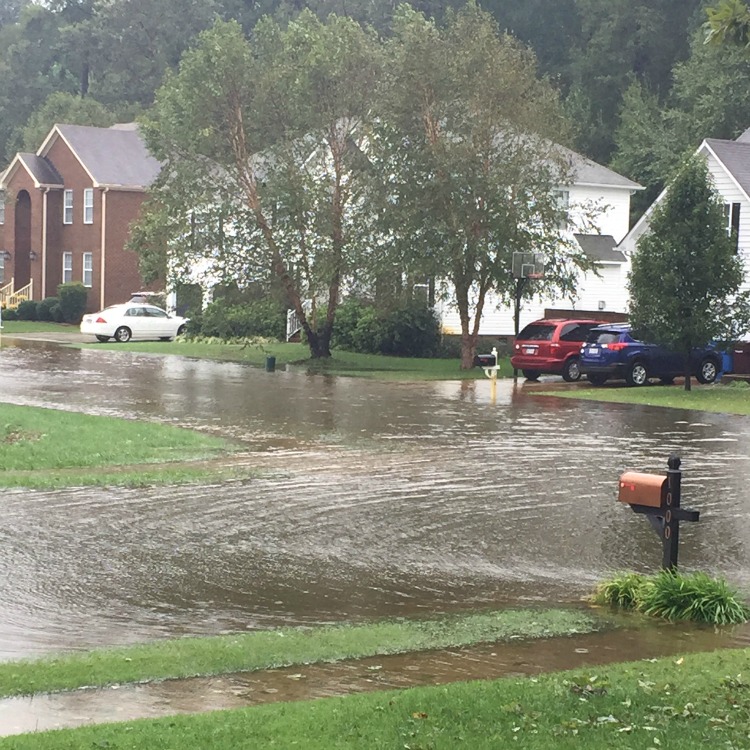 This is a drone video of part of my neighborhood after the hurricane. He has some amazing footage of our city and the flooding. What he captured was shocking to even me.

Sadly, we were not even the worst of the damage. So many others were worse off. The water has finally dried up as of this Thursday here in my neighborhood. North Carolina, just 10 minutes south of me, is still reaping the aftermath of Hurricane Matthew as the rain waters that dumped inland are making their way to the coast and breaking multiple dams.

I pray for all affected and I am so very thankful that our cars and house were not breached by the flood waters and that our family and friends are safe and sound. And now we clean up the mess with thankful hearts.

Taking nothing for granted,

Make sure this account has posts available on instagram.com.